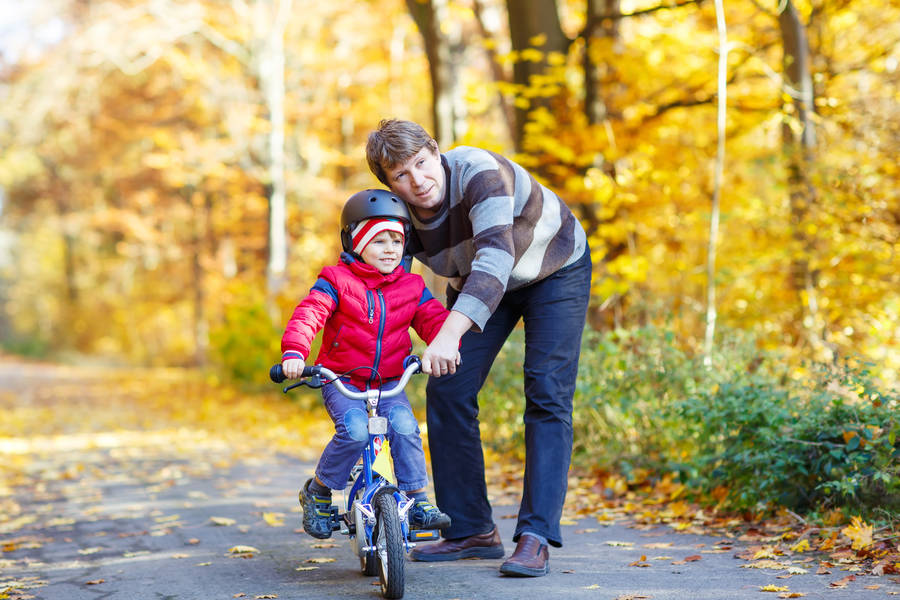 I was talking with a friend the other day about her child learning to ride a bike and we got to talking about when was a good time to try and ride without the training wheels.  We wondered if there was an average age to ride a bike without stabilisers and if it’s a bad idea to leave it too much later.  Anyway, it got me to think that if we were wondering, then perhaps the readers here where wondering too.

This post contains affiliate links. Clicking on them may result in a commission being paid to us if you purchase afterwards - this is at no extra cost to yourself. Thanks!

Most children between the ages of 3 and 5 are still using stabilisers on their bike and I would say the average time that stabilers start coming off is around age 5.

Now, that doesn’t mean that if you have a 6, 7, 8 year old or even older using stabilisers that they are behind the curve on this one and that you should start worrying.  Learning to ride a bike is such a personal thing that you should really just look to following your child’s lead and increase their confidence while riding so that they are maximising their chances of success once you do decide to take off the wheels.

Confidence is really key – it’s no coincidence that children are heading off to school and becoming more independent at that age and that gives them a push to be more indpendent on a bike too.

At what age should a child be able to pedal?

The main thing to think about before you even begin to go down the removal of stabilisers on your child’s bike is that they can pedal the bike themselves.  This can be done from an early age and at around 3 years a child will be able to propel himself around the garden on a bike, with stabilisers, by pedalling the bike.

Before they are ready you can certainly encourage your child to pedal more by gently pushing them along while encouraging them to keep their feet on the pedals.  Ask them to push the pedals as you’re going along and eventually they’ll get the idea that if they push their feet around, they’ll make themselves move independently.

It’s one of those stages – once they get the hang of it, and if you have a decent area for them to practice, they’ll be off! 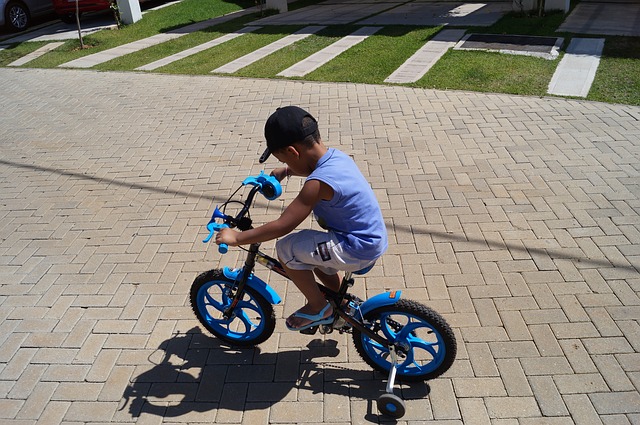 Image by atletes from Pixabay

When should you remove the training wheels?

Although there’s an average age, that doesn’t mean to say that on your child’s 5th birthday the wheels should come off and never go back on.  It’s a little more complicated than that!  I’d say that your child should probably fit the following criteria:

Now when you’re heading out to give that first ride without stabilisers make sure you’re in a safe area, as flat and as smooth a surface as possible to ride on and most importantly, make sure that YOU are in a good frame of mind!  No point in going out if you are feeling out of sorts because it will come across as frustration for the child.

If your child is sensitive to other people around while learning new skills then definitely aim to go at a quiet, early morning time – or practice in your garden if it’s big enough for you to do so.  It also doesn’t need to be done in one day – take your time and enjoy this period of watching your child work at this skill.

The main thing to remember about learning to ride your bike is that it’s mostly about confidence!

Tips for adding stabilisers to your child’s bike

Is a balance bike a good idea instead of stabilisers?

Some people love balance bikes and prefer them over bikes with stabilisers.  We used balance bikes ourselves when our kids were learning to ride but as part of the big picture rather than just using one thing.

Balance bikes are a completely different toy for kids to play with but they are great for learning to ride a bike without stabilisers because they can completely lift a child’s confidence while whizzing around on it and that’s what you need.  They start to teach your child to get good at balancing as they are just on two wheels while not having to worry about pedals too – they just need to propel themselves and keep upright.

Kids can keep their balance at a much younger age on these balance bikes I find and so I definitely recommend them if you can get your kids to play with them.  I also know of some people who simply take the pedals off a normal bike to do the same thing and that might be worth trying if you have a suitable bike to do so!

Interested in balance bikes for your child? – See our buying guide here 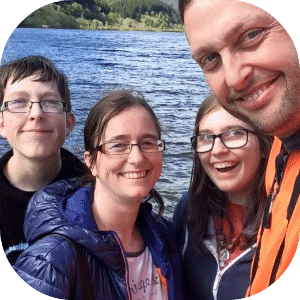 Hi there – I’m Kirsty and welcome to Get Kids Outside!

I set this site up in 2012 to encourage kids to be involved in and learn more about nature.  My kids are almost grown now so we’ve had many years of experience of getting outdoors when it’s rainy, sunny, windy and snowy!

I hope you find the site useful

This site contains affiliate links and as such any purchases or bookings made after clicking may earn me a commission.

As an Amazon Associate I earn from qualifying purchases.